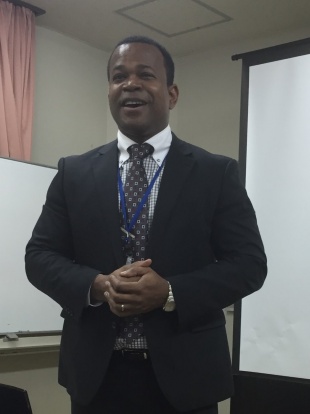 My name is Carl Taffe. I hail from the quaint little Caribbean island of Jamaica. What brought me to Japan, as is the case of many expats here was work. On March 28, 2009, I arrived in Japan to teach English as an Assistant Language Teacher (ALT), in Toyota City. The initial plan I had was to just stay for a year, to gain a broader appreciation for internationalization, but, somehow, I immediately fell in love with the country and the people, and in a blink, one year became five.
I have worked at public junior high schools in Toyota City, including: Honan, Asahigaoka, Asuke, Obara, and at a special needs school called, Toyota Yougo Gakkou. I have also had the opportunity of teaching at an elementary school, known as Negawa. All of these experiences have been priceless to me.
My interests include reading, studying foreign languages, traveling, and playing sports, such as football (including futsal), tennis, and basketball. Much to my satisfaction, my interests were a suitable tool when I moved to Japan; they have contributed tremendously toward my integration into my tasks and surroundings.
As for internationalization, apart from living in 4 different countries, other than my own, including Trinidad and Tobago, the U.S., the Dominican Republic, and Japan, over a span of 17 years, I spent the last 3 fiscal years working at Toyota City Hall, as the coordinator for international affairs in the International Affairs Division. During this time, I gained an invaluable amount of experience in promoting international understanding and cooperation. Now, I am working for the non-profit organization called the Toyota City International Association (TIA), in a similar capacity, and have made it my personal and professional aim to contribute as much as possible to building intangible bridges to bind people of various walks of life and nationalities together. As part of my job, I am currently the editor for the quarterly: The Citizens’ Omotenashi (Hospitality) Newsletter, which is designed to showcase various platforms in the city, where friendly and meaningful exchanges can take place between foreign guests and the locals.
I am recently married to a pleasant Japanese lady, with one child who is the absolute light of our life. I, along with my family, and a party of 8 remarkable individuals from Toyota City, most of whom are members of the group named: Okamisan Kai, took a trip together to visit the country of my birth, this January, 2017. We had the most amazing winter vacation, in addition to a culturally and internationally unique encounter in Jamaica. The engagement was infused with western traditions, traditional Japanese fashion, a Japanese tea ceremony, and lots of cheerful laughter. In the eyes of the locals and visitors that were present, it was a truly memorable exchange that deepened our understanding of internationalization. Such moments bring me the greatest feeling of euphoria.
The dream I have for the future, is to gain a richer and deeper awareness of the world, in order to play a more active role in bringing people together.
Thank you, Okamisan Kai, for crossing paths with me and aspiring me toward doing more to improve our world.
I had the wonderful pleasure of meeting you when I was assigned to teach you English. The lessons continued for a year and a half, but during that time, I, myself, was schooled by you in so many ways. I have personally been a recipient of your warm hospitality (おもてなし), which was extended to me every day during our class, and all the way to Jamaica, where you attended my wedding; an occasion I will never forget. For this, and many more reasons, I am forever in your debt.
Some of you have made the choice to study English, not merely for personal gains, but for the reason of extending a welcoming embrace to the visitors that come to Toyota City, like you’ve done in my case. Therefore, my only encouragement to you, is that you never lose that zeal of reaching out to others. Through your kindness and enthusiasm, I immediately felt at home in your midst, and always have an incredibly special time with you.
It is through people like you that will make visitors want to come back to this city again, and again. Keep up the wonderful work you’ve begun, and allow your infectious laughter and warmth to build bridges of friendship from Toyota City to the farthest reaches of our world.